This is a long-winded tale that has come full circle. It starts back when I first got Clarabelle and was searching for the right colour to paint her. I took a fleck of the original paint to a hardware store that offered a colour-matching service and they came up with Capsicum Red as being a close match. So I promptly purchased four litres and started slapping it on Clarabelle. The result can be seen in this pic of Clarabelle during the loading for the move in 2005. The section below the windows has been painted Capsicum Red and the result is – well at the time, it looked too red! Neither Abbie or I were happy with the colour match and resorted to a cheaper bulk acrylic colour marketed as Heritage Red which seemed to be a better match.

As time went on I realised that there were actually two reds involved in the colour scheme of these types of carriages and I did find a good match for the trim red on the droplights as Deep Indian Red. But the Heritage Red, being cheaper, didn’t hold the colour very well and turned a more brown-red – but I had 20 litres of the stuff and so it was good enough as a first attempt to cover and protect the carriage sides.

Now that I’ve run out of Heritage Red the search has been on to find a better match in a better quality paint to bring the outsides up to scratch. I’ve blogged about this before http://collectingqr.blogspot.com.au/2011/01/wrong-colour.html and haven’t had much success. On arrival in Adelaide I set about trying to find the right red again even going to the lengths of buying a small tin of modellers paint in Tuscan Red (the official colour given by QR for their red carriages) and, when I went to get a colour match at the hardware store, that came up as Indian Red and the colour marketed as Tuscan Red by the paint companies bore no resemblance to the red I was after!

So the latest attempt has been to take out a variety of those little swatches of colour you can get from the hardware store and try to get a match against the only remaining piece of original paint work still attached to Clarabelle (the eastern end). This was still compromised by fading of the original paint and worn-in grime and dirt but I finally got what looked like a good match and it was – Capsicum Red!

So, being cautious, I bought just one litre and last weekend got to slap some around. Low an behold, it was the right colour all along! Now it’s back to the paint store for more and soon (hopefully!) Clarabelle will be restored to the right colour for the first time in 20 years!

Posted by Paul Willis at 5:59 PM No comments:

While sorting through old files, I came across this shot of Clarabelle on the first day that I saw here. From memory that was the 19th December 2005. As you can see, there's been a lot of work put into her since then! 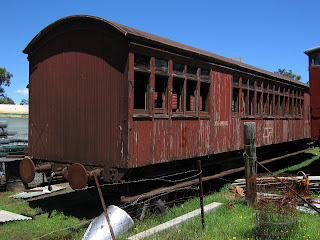 Posted by Paul Willis at 9:06 PM No comments:

This is exciting and a bargain to-boot! I won this earlier this week on Ebay and it arrived in the post this morning. 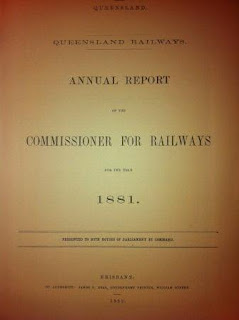 It’s the Annual Report for the Commissioner of Railways for Queensland Government Railways in 1881 (published 1882). Think about that; this dates to the time Ned Kelly was having a shoot-out at Glenrowan a thousand kilometres to the south!

It’s packed with details about stock and locomotives and traffic and every conceivable detail of what was then still an embryonic network. It includes a map of the system which shows in effect four separate railways starting in Brisbane, Bundaberg, Rockhampton and Townsville and reaching inland. The Northern Railway only extends 55 miles to Ravenswood Junction with an extension to Charters towers under construction and a route surveyed as far as Hughenden. Significantly, there are no plotted intentions to connect these separate railways with a line following the coast. 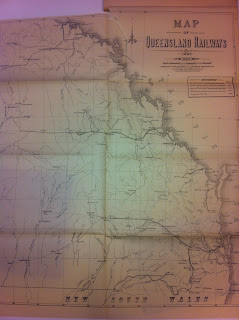 This copy comes without a binding – so I’ll get that sorted – then she will sit in Clarabelle for quiet contemplation and reading on quiet nights when the insides are fitted out.

Oh Bliss! With my wife away for the weekend and Chester on school holidays I bundled the pair of us off to Clarabelle for a couple of days. I had the Monday off so we camped two nights onboard and, although a little cold, t'was a splendid time for the pair of us! We have a proper mattress in the main bedroom so sleeping is comfortable and a camp stove and gas lights provide us with the cooking facilities and light we need to make an over-night stay enjoyable.

And I managed to get a fair bit done to the northern side during the day. Mostly cutting out rot, sanding back and painting but I didn't get to a finished stage that I could photograph. So I thought this time around I'd show a couple of before and after pics of work on the interior.

These are two pics of the lining of the carriage in the dining area. In the first pic some work has already been done. Toplights nave been fabricated and installed, droplights rebuilt and reglazed, rub-rails removed, refurbished and refitted, lining below rub-rails replaced and straightened, window sills fabricated and the bulkhead on the left build from scratch.

In the second pic the main difference is a few coats of paint. The table has also been made and installed and the seat relocated. This still requires the excess paint scrapped off the windows and some sanding back of some rather heavy-handed bogging up of holes where luggage racks were attached but this is a dramatic improvement over the first pic, don't you think?

Posted by Paul Willis at 8:46 PM No comments:

Most of the fittings in Clarabelle were stripped out at some time in her past, probably soon after she was decommissioned in 1990. This included all the metal work that could be salvaged for scrap or repurposed. Door locks, handles, grab rails and other fittings were removed and probably melted down. Luggage racks were also removed but many of these found their way into people's homes as novelty shelving.

So I've had to refind all kinds of bits and pieces which, if they are still available, are now classed as antiques and attract prices to match! Luggage racks regularly turn up on Ebay which is my main source for them and I now have several of them - probably enough for my intended uses around the inside of the carriage.

It was while collecting luggage racks that I became aware of there being two types and I've been able to piece together a bit of their history from a variety of sources.

The older types have the 'QGR' motif and are usually bronze. Frequently these have been painted over in the colour I now call Deep Indian Red. They appear to have been fitted to carriages well into the 1950s and originally Clarabelle would have been decked out with this kind of luggage rack.

The second type of rack have the 'QR' motif. These are often chrome-plated and can be polished to a high shine. I think that these started to appear in trains in the 1960's.


Beggars can't be choosers and I have to take whatever I can find so I now have a mixture of these two types of luggage racks ready for installation with some already installed. And it's when I came to installing them that I realised that they come in a bewildering range of sizes! The racks on the market have been sourced from a variety of different types of carriages and thus were required to be all different lengths. The longest I have is 2.4 metres long and fits across one end of the carriage.

Authentic luggage racks have the carriage number stamped into the back of the mounting plate of the supports. Not that forgeries are a problem! While luggage racks used in NSW were subsequently copied and sold through home wares stores, so far as I know this did not happen with QR luggage racks. If it has ends that resemble either of the above, you can be assured that it is the genuine article!

I would be interested to know if any readers can fill in some more details about the history of these racks. When did they change from the old type to the new type? If you know, please drop me a line or add a comment on this blog.

Just thought I'd throw in these pics taken by Advertiser photographer Nigel Parsons for the Sunday Mail. These pics weren't used in the final article that came out last Sunday.

It's been a while, over a year in fact! But the inteveneing 12 months has seen my family and I move to Adelaide and take up new lives and jobs in this wonderful city. We intend for this to be a permanent move and so have spent a good part of the last year planning the move of Clarabelle over to South Australia to join us. And that happend last month when she arrived on the back of Mario's truck, delivered to the new site at the St Kilda Tramway Museum.


Clarabelle now stands on a small plot sublet by the Tramway Museum to the SA Finescale Modellers club of which I'm now a member. She's much more accessible for me here being just an easy 35 minute drive from my new home so hopefully I'll be able to make some more serious progress on her restoration and refit!