I thought this would be a straight forward job and it was, but a lot more hand-sawing and adjusting than I bargained for.

This past weekend I spent a day installing the bench tops in the kitchen area I’ve been working in over the last few weeks. In an earlier blog I made mention of getting a hold of some solid Rosewood flooring and even did a test fit of a few pieces.

It turned out to be a lovely wood to work with and the tops soon took shape. Being flooring the tongue and grooved edges added to the strength, interlocking the pieces into a flat and durable surface.

The fiddling came in getting the first piece cut to accommodate the window surrounds and the second piece so that it fits relatively snugly up against the splashback (which isn’t as square or flat as it appears). Then there was some fiddling about to get the holes right for the sink and stove but it all came together well.


Next job is to trim the edges and finish them with some Silky Oak as an edging timber. When all that’s done it should look pretty good, don’t you think?


Worked pretty hard yesterday in the kitchen area connecting up the two powerpoints and then building in the framework for the benches. These are all 24x42mm Maranti which is readily available through Bunnings and easy enough to work with.

I’ve tried to set up a strong structure which needs some cladding in Silky Oak to finish and all the joints are half-joints buttressed underneath. The apparently random spacing of the stretchers is to accommodate the stove and the sink both off which will be let into the bench top.

So next week I can start putting the top on!
Posted by Paul Willis at 9:19 PM No comments:


This week Chester and I went out late on Saturday afternoon and stayed on Clarabelle overnight so I was able to get in a good full-day’s work on her on the Sunday. Having said that, there’s not a lot to show for a day’s work! 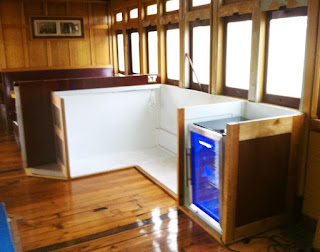 The most obvious difference is the installation of the new fridge which has a glass front and a cool blue light inside. I thought this style of fridge, which I sourced through a company that specialises in fridgesfor pubs was more interesting and funky than the more traditional domestic whitegoods type mini-fridge. 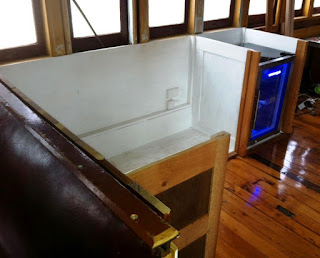 Most of my time was spent filling then sanding the walls around the windows at the back of where the kitchen bench top will be and you can see that in these pics. I also installed two power sockets, which have yet to be wired in.
Posted by Paul Willis at 6:51 PM No comments:


No blog last week because I was on the road driving to Sydney and back (3500km in a week!). Not only did I have to drop off those batteries I mentioned earlier but I had a few bits and pieces to pick up for Clarabelle along the way.

I stopped at Zig Zag Railway and picked up some more locks and door furniture that I need to open the two doors on the northern side as well as some new matchboard to replace patches of rotten stuff along the sides and ends of the carriage. I also picked up a large container of the special gloop that I use to create a waterproof membrane on the roof (enviroclad) because I figure that it’s been two years since my last coat up there and perhaps she’s due for a new coat.

I also picked up two boxes of solid Rosewood flooring that I intend to use for bench tops in the kitchen. It took some time to both decide which timber to have on the bench tops and then to source it. I wanted a dark timber to offset the lighter Silky Oak. I did think of Jarrah but always had a reservation that it is a timber from WA and unlikely to have ever been used by QR.

Then I was mucking around with a setsquare and spirit level I have that are from the original QR carriage workshops at Ipswich. Both are made of brass and Rosewood, which got me thinking. Rosewood is a hard, dark timber readily available in Queensland so I could argue that it would have been used on QR carriages. A bit of an internet search identified a company in western Sydney that made solid Rosewood flooring (although I think it’s from New Guinea) and arranged to pick up some while in the east.

So last weekend I set about using this beautiful timber, not as a benchtop (yet), but as a splash back across the carriage behind the seats in the dining area. 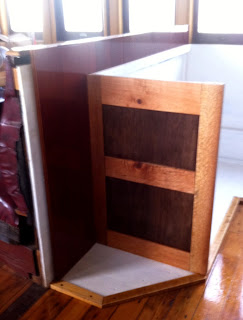 As you can see it is a beautiful timber and the top surface had been finished to a high gloss with a polyurethane varnish. Because it’s flooring it’s tonged and grooved so it slots together nicely. It’s very easy to work with and I’m impressed with the results.

You can also see that I installed the kitchen end that I fabricated a few weeks ago. A good fit into the space and robust enough to provide good support for the back of the seat. Later in the day I gave this a coat of 50/50 varnish and turps to start that process of making it look special.

Impatient as ever, I laid some of the Rosewood flooring out where part of the bench top will be just to get an idea of what it will look like. At this stage I have not varnished the Silky Oak woodwork underneath so the finish between the two is a bit awkward and I have a few more coats of white to put on the inside of the cupboard space but I think you can see that this looks like it will all work out very well!

The next step here, before I can go ahead and put the bench tops in, is to finish the wall behind. That’s a matter of filling, sanding and painting but will slow things down a bit because I’ll have to set up dust and paint traps to contain the mess. I also really ought to get to work on some sealing jobs on the outside of the carriage but last weekend was a bit too windy to work outside comfortably.

So many jobs to do, so little time to do them!

Posted by Paul Willis at 8:02 PM No comments: