Just when all was going well some moron (or morons) graffitied one side of Clarabelle. I can't describe how angry, frustrated, disappointed and sad I feel about this. Years of hard work spoilt in one night by some semi-literate coward with a spray can. Yes, it can be patched up and painted over, but that's a whole lot of extra work I didn't need. 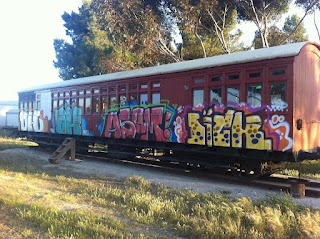 If anyone has any suggestions as to how to prevent this from happening again, I would really like to hear them.
Posted by Paul Willis at 4:34 PM No comments:

Time to assault the final end that has not been restored since I bought the carriage back in 2005. 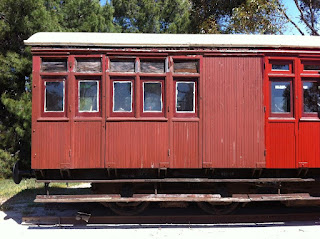 The first point of attack are the toplights. Originally the carriage was built with small windows (toplights) above the main windows. They were of red glass on the doors and green glass above the windows. Some time later, (I think in the 1950's or 1960's) QR took the toplights out and replaced them with panels made of plywood. I'm not sure why this was done but have heard that they were prone to rot and required extra attention.

Well I decided very early in the piece to replace the toplights, which meant rebuilding the frames and glazing them, then replacing the old plywood panels with the new toplights. Let me take you through the process of replacing a toplight step by step so you can see what's involved. 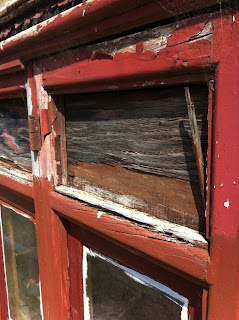 As you can see, this is quite an undertaking! That pinkish-red paint on the upper parts is the original paint from the QR days and hasn't been touched, probably since 1985! The brownish-red paint is a cheap acrylic I've slapped on a few years ago to prevent things getting any worse until I can get around to fixing it up. 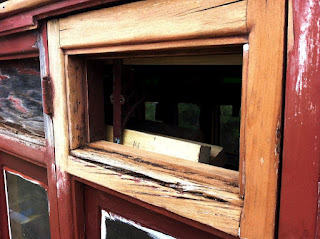 First thing to do is knock out the plywood panel and clean the whole area up using a 40 grit sandpaper. This is the result and you can see that most of the timber is actually pretty sound - considering it's 88 years old and received no attention or care for the last 25 years! But the sill and the area below the sill are going to need some more attention - there is a lot of rot in this area. 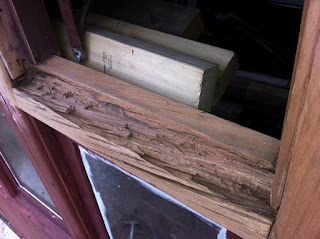 Here I've chiselled out the the old sill and much of the rotten wood under it. I then attacked it with a wire brush to get the rest of the rot out. 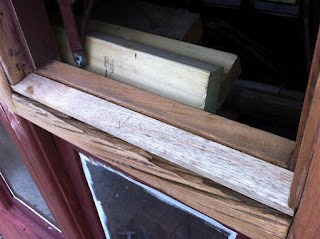 Now I test fit the new sill made from Tasmanian Oak. The original timbers are Silky Oak and that is too expensive to contemplate using - particularly as it's all going to be painted over and won't be seen! 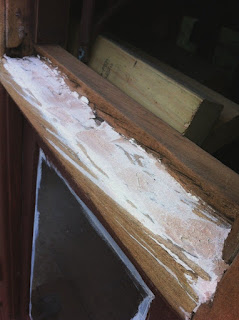 Removing the new sill, I now bog up the underlaying timber with an epoxy filler. This stuff sets very quickly and can then be sanded into shape, paying particular attention to recreate the curved front edge. The new sill is screwed in place. 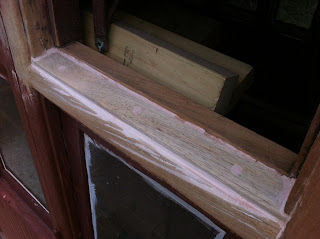 More bogging and sanding to fill out all the gaps 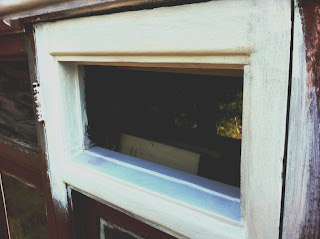 Then a coat of 3-in-1 to seal the whole lot up. I've had to darken this image a lot because of all the white surfaces not showing up the detail of what's happened here. 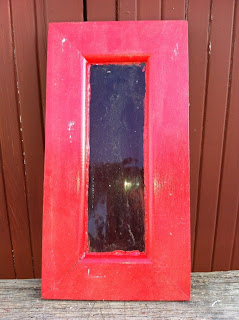 This is one of the toplights, I've had to make 46 in all. They are a simple double-frame construction with a smaller frame on the inside. 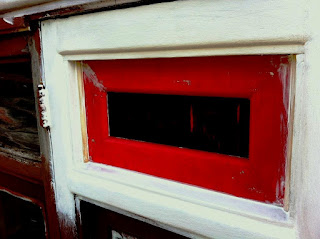 And here it is installed in the carriage. At the moment it's all just held in with sealant (I use No Gaps) but I might put a few nails through the quadrant at either end just to hold it all secure.

I would be interested in any comments from readers who have tackled similar problems and how they dealt with them.

Posted by Paul Willis at 8:27 PM No comments:

More painting last weekend - slowly but steadily getting there! 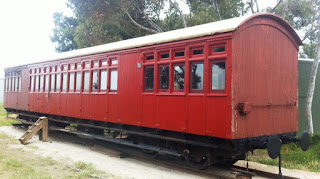 Posted by Paul Willis at 4:27 PM No comments:

I was just looking over Google Maps and found out that they have updated the images for where Clarabelle used to be near Wellington NSW. She was there from mid 2005 until earlier this year and, during that whole time, this area was covered by an earlier air phtograph so she did not feature. Now that she's been moved, they have updated the pic and there she is (or rather was!).

More work on the deck this weekend with a fence going up around two sides.

Apart from a lick of paint, I'm going to leave the deck for now and concentrate on the outside of the carriage. This deck is only one third done but servicable for getting in and out of the carriage. I'll leave the finishing until a mate comes over from Sydney to lend me a hand, probably in mid October.

It’s been a couple of weeks and it’s not like I haven’t been doing anything, just that I haven’t been working directly on the carriage and work has been slow.
I’ve been building a deck next to the carriage to make access easier. I actually started some time back, buying the various timbers and cutting the posts to let in the joists, adding stirrups to the posts etc so that, theoretically, I’d have all the bits on site and I’d just have to bolt the whole thing together. Of course it’s not that simple and this is the result of two weekend’s construction activities at the site. 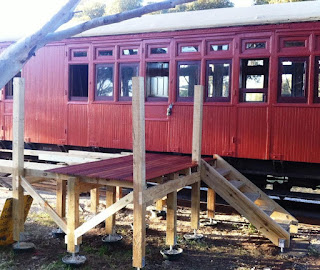 However, I am pleased with the way it’s coming together – except for that wonky post on the corner (as straight as a dog’s back leg). I have a plan to sort that out and eventually the deck will extend for three times this length along the carriage. Already getting in and out is so much easier but there’s a lot of effort and hard work in making life easier!
Posted by Paul Willis at 6:28 PM No comments: