Leaping ahead in the renovation process to the day when we eventually move in and use 1072 as a home away from home. As part of that long-dreamed-of day it is my intention to deck out the carriage with as many period QR bits and pieces as possible and collecting to that end has begun in earnest. That includes crockery, silverware and just about anything else that I can get my hands on. 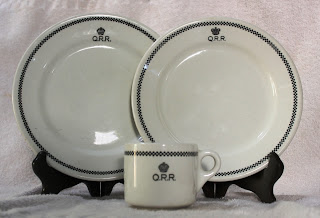 I picked up these three items as a job lot on Ebay for the astonishing price of $20. In fact the two plates were on offer with the cup thrown in for free because it was stained. A quick wipe with a plastic pot scourer and it came up good as new!
“QRR” stands for “Queensland Refreshment Rooms”. There were a number of these dotted throughout the network in the days of steam at major stops and junctions along the line. The idea was that, as the loco was being refreshed, recoaled and watered, the passengers could do the same with a readily available food and drink service. While there are many fond memories of these rooms there are several contemporary reports complaining that they were expensive and offered poor-quality food in a monopoly situation.
These particular items were made for QR by the famous pottery firm of John Maddock and Sons of Burslem in England. While they are more famous for producing highly decorated fine china, they also had a division specialising in hotel ware. Among their more famous clients was the White Star Line, making all the crockery for the Titanic.
One of these marks indicates that the two plates were made between 1896 and 1906 while the mark on the cup has proved to be harder to date and is probably much younger. A list of potters marks as used by John Maddock and Sons can be found here. The plates are 8.5 inches and 8.9 inches in diameter and all have the QRR Crest and a margin of double chequered pattern.
That’s as much as I know about these items and, if you can add more details, please let me know. I’m also after more plates, cups and other QRR crockery so if you have some knocking around that you don’t need, please get in contact with me!
Posted by Paul Willis at 10:36 PM